Ted Thomas Is A Local Hero

Ted Thomas Is A Local Hero 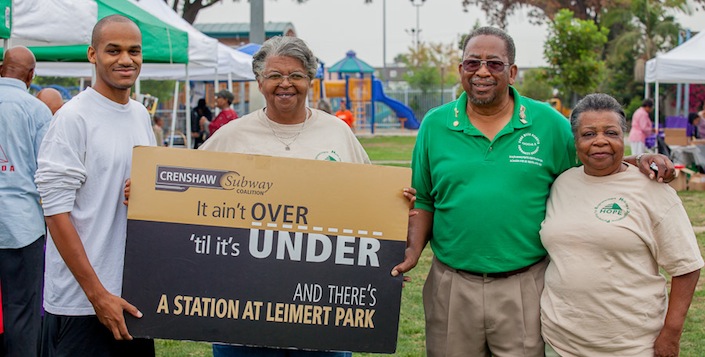 “You have to keep organizing all the time. You can’t ever stop organizing,” explained Ted Thomas, President of the Park Mesa Heights Neighborhood Council. Though Thomas is a soft-spoken man in his 70s with a grandfatherly air, he is a force in local politics and has led his community to some recent high-profile victories.

Ted Thomas and Lark Galloway-Gilliam of the Community Health Councils caught wind in the 11th hour last summer that the California Science Center planned to transport the Endeavor space shuttle down Crenshaw Blvd., removing hundreds of mature trees in the process. Thomas and Galloway-Gilliam moved quickly to mobilize the community. They hired a lawyer and, within months, secured a community benefits agreement worth $2.7 million. “Ted and Lark caught the Endeavor issue before it overran them,” explained Kallid Al-Alim, Vice-President of the PMHCC.

The Science Center agreed to replant four new trees for every tree removed and to continue to maintain them, to repair sidewalks, preserve trees planted in honor of Dr. Martin Luther King, and to provide scholarships for 200 area high school students. Local students were also invited to watch the shuttle’s passage through their community from a private viewing platform.

Ted Thomas is a committed community organizer, who rarely takes a break from serving his community. He spent ten years working as a labor organizer with the UAW before he retired and learned that a political body can never stop building capacity and recruiting new members.

Thomas first entered local politics because the City was failing to maintain the sidewalks and trees on the street in front of his house. “I put a block club together in less than four hours,” he explained. “I was walking up and down the street asking people to join – everybody was just waiting.” With the backing of the block club, Thomas was able to get the trees replaced and the sidewalks fixed.

On most days, you can find Ted Thomas in the PHMCC office – he spends about 40 hours each week there – meeting with local officials, reviewing plans, and talking with the public. He hopes that one day his community will be so well organized that, “when elected officials start going against us 40-60% of the time, we’ll have enough people on a list to recall them.”

Thomas points out the proposed path of the at-grade Crenshaw line outside the PMHCC office building. Thomas intends to fight for an underground subway line and station at Leimert Park.

In November of last year, Thomas told the New York Times, “In this community, we don’t have money. The majority of people think we’re a pass through on the way downtown.” He was referring to LA Metro’s decision to run the proposed Crenshaw rail line at-grade through his community, and to bypass Leimert Park, “the heart of black culture in Los Angeles,” without a station stop.

Thomas and others are working to change that. The Crenshaw Subway Coalition, of which Thomas and the PMHCC are members, recently turned out 700 protestors at a Metro board meeting, only to be locked out of the session. Thomas remains undaunted, and insists that they will continue to push for an underground rail line and a station stop at Leimert Park. “We want to make sure that we are in the mix and not taken advantage of any more,” Thomas explained.

Thomas is also focused on an issue that is inflicting undue financial hardship on many of his neighbors. The PMHCC President recently learned that many Park Mesa Heights area residents have been paying up to $1,700 per year for FEMA flood insurance, despite the fact that they are 140 feet above sea level and nowhere nearva river. The PMHCC brought this to the attention of the FEMA office in Washington D.C. and they were able to get some payments refunded for the most recent two years. However, some residents have been paying the higher rates for over a decade.

Thomas said, “We may have to file a class-action lawsuit.” 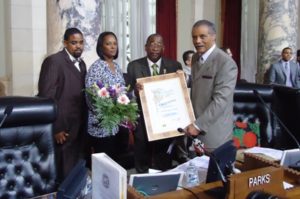 Thomas grew up in Fairfield, Alabama, a small, mostly black, steel-producing town, with an “A-rated” high school, a college, and as he remembered it, a church on every corner. Thomas said that Fairfield was “a unique town,” where “you couldn’t walk down the street without talking with your elders. If you didn’t speak to them, your parents would hear about it before you even got home.” At 19, he arrived in Watts and has lived in South Los Angeles ever since.

In 2011, Thomas lost his wife of over 40 years, Claudette, to cancer. She had served as Secretary of the PMHCC since 2007, and had been her husband’s political partner since the days of the block club. He said that the past year has been a struggle without her, but he vowed to continue serving his community. “You can’t ever stop organizing.”

Planning and Land Use Committee Meeting

Community Meeting on Bills that Would Destroy Single Family Neighborhoods