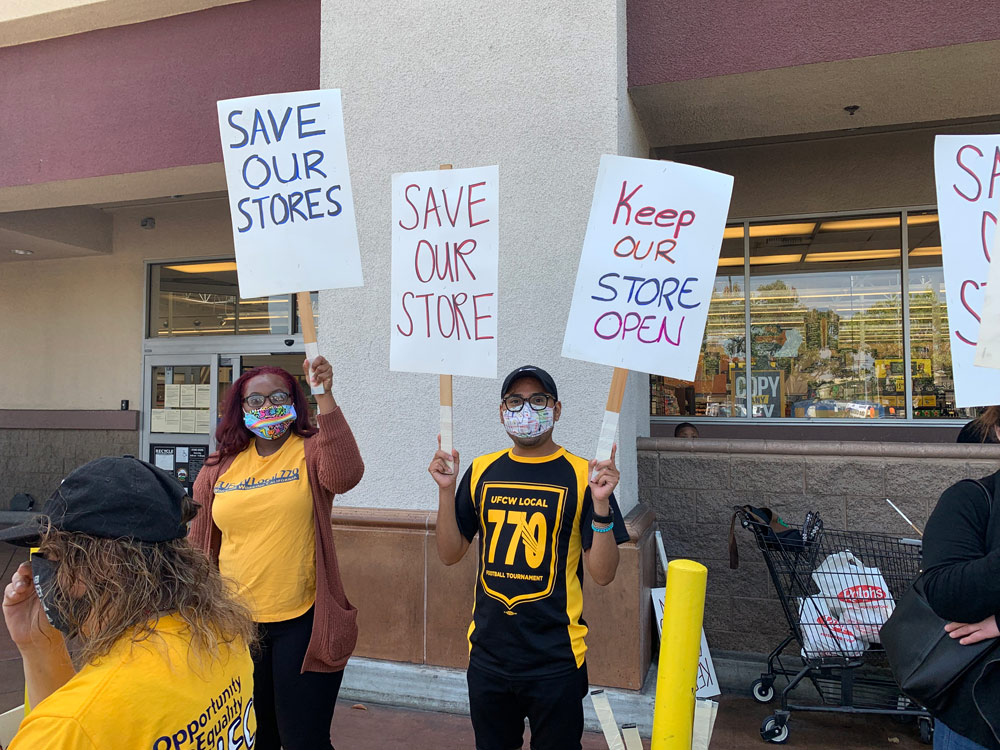 Faced with the closing of five stores in the Los Angeles area, including South Los Angeles in predominantly Black neighborhoods and two in Long Beach, unions, community groups, seniors and shoppers rallied April 3 at the Slauson Avenue Ralphs grocery store.

Kroger, the parent company of Ralphs, Food 4 Less and other stories around the country, took this drastic step in reaction to the mandated $5 hour hazard pay increase by the Los Angeles City Council ($4 increase in cities elsewhere).

More than 250 jobs are at stake, (one-third are unionized in Local 770, United Food and Commercial Workers (UFCW)), if these stores, in operation for decades, were to close.

“Efforts to close this store is a slap in the face of my organization and the neighborhood,” Smart thundered. “This store, slated to be closed, would create a food desert in this area. It is in retaliation for the increase in salary.”

Smart noted that the Slauson Ralphs store was not a poor performing store as management claims.

“They are lying,” Smart said. “The people need this store. It is a problem for the community. Where do they go for food?  People have to eat.  It is disrespectful to close the store. South LA needs every single grocery store.”

In an emailed statement from Kroger claimed that the two Long Beach stores were “underperforming,” and that the anticipated 20-30 percent increase in operating costs could not be sustained.

Bishop Donnelle Smith, speaking for the Baptist Ministers Conference, explained why he and members of his congregation were present.

“We are here at the request of senior citizens in this community.  We were told there was a meeting to close the store, but people were never informed,” Smith said. “The increase in salaries for hazard pay was never paid. We need these stores and people should be paid what they deserve.”

Carol, of the LA Black Workers center said, “I have been a member of this community since I was 14.  This store was built in 1969 and it is the only grocery store around.  Instead, they want to tear it down and build condominiums costing hundreds of thousands of dollars, which none of us can afford anyway.”

Jeremiah Gordon, lead organizer for the LA, Black Workers center added that, “Since the pandemic we have seen so many people on unemployment, a very large percentage of them Black Americans. We came out to support the workers here.”

SCLC activist Allison Featherstone told the growing crowd “We are so glad to be able to help bring all of these organizations together.  We need to keep the momentum going to keep the store open and save the jobs of the 80 workers here.”

Tori Bailey, representing the United Neighborhood Council and one of many members of local neighborhood councils participating,  told this reporter, “We are going to keep this store open whatever it takes.”

The chief union involved is UFCW local 770.  Whose president John Grant told Random Lengths “This demonstration today reflects the pain and outrage that this closing represents.  Kroger thinks they are above the law.  They were given the privilege of operating this store but they’re shirking their responsibility to the community.”

Another community group represented was the Union del Barrio and Ron Gochez, a member, affirmed their organization’s support for workers in Ralphs and in the South-Central community. “To close this store down is to take the food out of our mouths”.

Rally chairperson Rebecca Jackson, speaking for Harriet Tubman Center for Social Justice in her remarks added that “Genocidal U.S. government should take a lesson from the revolutionary people’s government of Cuba. Access to fresh food is a human right and all workers are provided for equally. Profits are never a consideration in ensuring essential services are accessible to all.”

Kroger is waging this fight wherever municipalities are passing the $4 hazard pay increase, setting up a multi-front war with workers and communities across the United States. .

The grocery store giant  recently announced that they will also be closing two “underperforming” QFC locations in Seattle, noting that the average hourly wage for Seattle QFC employees is already roughly $20, and that Kroger is offering $100 incentives for employees to get vaccinated as well as a $50 million rewards package of store credits and points.

Another rally is planned for 11 a.m., April 8 at the Food 4 Less store at 5420 W. Sunset @ Western.  The coalition is demanding that neighborhood stores be kept open, no layoffs, an end to bullying of workers and the community.  They urge people to sign the petition at: bit.ly/shameonKrogerLA and to call or email Rodney McMullen, Kroger’s CEO to support the community’s demands. rodney.mcmullen@kroger.com; (513) 762.4000.

This was first published by Mark Friedman on RandomLengthsNews.com mark.friedman@randomlengthsnews.com